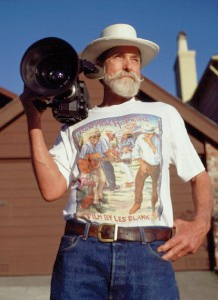 Blank is perhaps best known for his feature-length Burden of Dreams (1982), documenting the chaotic production of fellow director, and friend, Werner Herzog’s 1982 film “Fitzcarraldo” in the jungles of South America. Honored with a Criterion DVD edition, and a British Academy Award, Roger Ebert called Burden of Dreams, “…one of the most remarkable documentaries ever made about the making of a movie.”

Another of Blank’s best-loved works is Garlic Is As Good As Ten Mothers (1980), a seminal food film featuring culinary pioneer Alice Waters, and the Gilroy Garlic Festival. This film, notorious for its mouthwateringness, was initially shown in “Aromaround” with garlic simultaneously roasted in-theater.

Les Blank enlisted a handful of talented people to help with his films, beginning with Skip Gerson, then followed by, Maureen Gosling, Chris Simon, Susan Kell, Marianne Yusavage, David Silberberg, son Harrod Blank, and Gina Leibrecht. Many of these collaborators have gone on to make their own films.

Two of Blank’s final films, All In This Tea (2007), and How to Smell a Rose: A Visit with Ricky Leacock in Normandy (2014), were both made in partnership with Gina Leibrecht. All In This Tea, is a feature documentary following tea specialist David Lee Hoffman to the most remote regions of China in search of the perfect leaf. How to Smell a Rose documents Les Blank’s year 2000 visit with the legendary co-founder of Direct Cinema, Richard Leacock. A conversation between these two seminal filmmakers explores Leacock’s historical adventures in film making and his other passion — cooking!

Prior to Les Blank’s death, in April of 2013, the non profit “Les Blank Films Inc.” was created and son Harrod Blank, a filmmaker in his own right, became the organization’s president. In addition to overseeing distribution efforts and re-mastering Les’ films, Harrod spent two years navigating the rights to release perhaps Les Blank’s most significant work, a 1974 film entitled A Poem Is A Naked Person about musician Leon Russell (currently in theatrical release by Janus Films, and coming soon on DVD/Blu Ray from Criterion.) Also in the works is a feature-length documentary about Les Blank by Gina Leibrecht and Harrod Blank tentatively titled, “Les Blank: A Quiet Revelation.”

Here is an in depth interview with Les Blank by BYOD via YouTube video.

“I can’t believe that anyone interested in movies or America…could watch Blank’s work without feeling they’d been granted a casual, soft-spoken revelation.” – Time Magazine

“A master of movies about the American idiom… one of our most original filmmakers.” – New York Times (Vincent Canby)

Special Jury Award, Sundance Film Festival (In Heaven There Is No Beer?)

Selection of two films (“Garlic Is As Good As Ten Mothers” and “Chulas Fronteras”) by the U.S. Library Of Congress for inclusion in The National Film Registry (joining Fred Wiseman and the Maysles brothers as the only documentarians so honored)