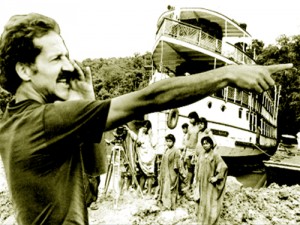 Les Blank has made a name for himself as the cineaste par excellence of blues singers, folk music from Tex-Mex to polkas, and folk cuisine (Garlic Is As Good As Ten Mothers). When he filmed Werner Herzog Eats His Shoe, his culinary interests met Herzog’s moral-spiritual ones (honoring a bet). And lately. he’s been easing over into another bracket, fIrst shooting Poto and Cabengo with Gorin, and, with A Burden of Dreams, returning to Herzog’s spiritual activities. Its a documentary of Herzog shooting Fitzcarraldo and its subject is a double dream coming true against all the odds. Herzog’s vision is of shooting, up the jungle river, a work of art about Fitzcarraldo’s vision, of staging, up the jungle river, the operas he loves.

Some reports of the first version suggested that it showed Herzog in a none-too-flattering light. Be that as it may, this cut is a pretty even-handed picture of a man in a situation so morally complicated as to make the angels weep. Quite apart from the horrendous logistics, and the visual-practical problems of the shoot (which dragged on for four years), problems arose with local authority power-struggles, German radicals talking of genocide, incompatible pay-norms as between technicians and native labor, and tribal quarrels over digging up turtles’ eggs. Such intrigue is often a problem for direct cinema, since it tends to be too internal, or verbal, or diffuse, to be filmed, on any normal budget, and inevitably much of the film shows someone telling us his version of what happened, not the event itself. It’s actually common for direct cinema to be very indirect cinema.

If you surrendered to Herzog’s Fitzcarraldo, this movie’s a must, complementing its vision without breaking its illusion. Blank sticks close to the location and camp life, and finds some marvelous images. The Indians still smear poison on their spears but also wear Mickey Mouse T-shirts. Kinski can’t bring himself to drink a yucca drink because native spit was part of the recipe (Blank’s cuisine theme again). Natives make arrows to sell as souvenirs and spend the money on Polaroid snaps of themselves. Tensions mount near breaking-point because the only soccer ball in camp has a hole in it and the men can’t work off energy in sport. Gradually a film about Herzog making the film (against difficulties no less impressive for being self-imposed) shades over into being a film about two cultures sliding past one another, using one another, but unable to make contact. Apart from the contrast between native and Europeans, many other visions shuffle and rub past one another . The commentary is spoken by a cool, flat, respectful female voice, which oddly contrasts with the jungle, the heat, the mostly male energy.

Another odd angle comes from the scene where an actor explains to Blank’s camera that acting in front of the camera gives him physical pleasure, ‘otherwise I’d be a bank manager’. It all seems strangely hermetic, said like that, amidst this sombre, exotic, oppressive, wild jungle. Oddly enough, two Indian women getting ready to fight over a disputed man show exactly the same, off-key, expressions and hesitations and tempo as I saw in a similar situation in an Islington pub.

Visions on one hand, mutual blindness on the other. The two themes interlace in the strangest ways. As Herzog’s bulldozers work (erratically) away, you realize that to shoot the steamboat in profile, he had to clear a much wider area of jungle than was needed to haul the steamboat. It’s as if to see is to destroy. Actually, Herzog’s talk about the jungle is much more uncomfortable, and persuasive, than the visual grandeur of Fitzcarraldo. In his beautifully sad, serious voice he confesses his philosophical terror at the jungle’s fecundity and rapacity: ‘it’s the harmony of perfected and overwhelming murder’. And Blank’s camera (or editing-bench) spots an ant toiling under an enormous red feather. Emphasized like this it becomes a metaphor for – well, one hardly knows what for: Herzog hauling his steamboat? flaunting his film?

Herzog ruminates: ‘We have to humble ourselves in the face of all this overwhelming misery, fornication…’ Which suggests a new turn in his thinking. Most of his previous films asserted a kind of pride: the energy of the spirit, the will, the enterprise, the grand gesture.

Clips from the first version of Fitzcarraldo show Jason Robards in the Klaus Kinski part, and Mick Jagger as a sort of simpleton, whom Herzog dropped when Jagger left. The ‘first drafts’ of the scenes are especially fascinating after seeing the final version, and the contrast is very instructive if you’re interested in content-or-style debates. It seems to me that the different actors, moving in entirely different ways across the scene, profoundly transform the sense of the set-ups, business, and events. And no doubt Herzog’s ideas changed as he went along. Oddly enough, the earlier, ‘first choice’, versions look a lot more ‘busy’ and a lot less poetic than the makeshift one – less Herzogian, in fact.

Herzog’s way of talking strengthens my quiet suspicion that even if Fitzcarraldo isn’t his strongest film, it marks a certain mellowing in his previously too crude dismissal of the bourgeoisie. The way in which high art for its own sake, and bourgeois trade and commerce, work together might even make his film a quietly Eurocentric answer to leftish tales of the natives versus the imperialists, the jungle versus civilization. (I ‘m thinking of films like Bunuel’s Evil Eden, and of Carpenter’s still, alas, unfilmed, novel, The Lost Steps). From a certain angle, Fitzcarraldo is the 1980s mutation of the Korda epics.